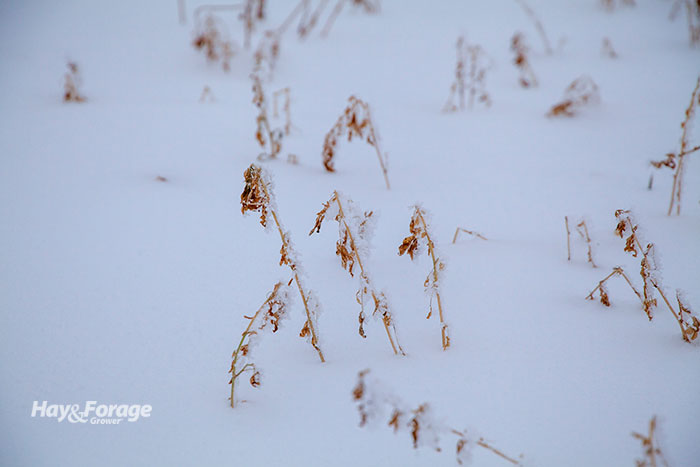 More than adequate snow cover has characterized the winter for a large swath of the northern U.S. and a fair number of central states. This has been a blessing with the recent stretch of downright frigid temperatures.

Snow offers the advantage of moderating soil temperature, both when the air temperature is bone-chilling cold and during stretches of unexpected winter warmth that can cause alfalfa to break dormancy long before it should.

Given a choice, most Northern alfalfa producers would prefer snow cover throughout much of winter even though the white stuff is cause for other farm inconveniences.

The risk with snow cover comes with a rapid meltdown, where mountains of snow are quickly transformed into gallons of water that remain in fields and have the potential to refreeze and stay frozen for an extended period of time.

Ice, without question, is far more damaging to alfalfa than any other offseason weather phenomenon. Ice sheeting may cause damage to or kill alfalfa plants in three ways:

Injury is most likely to occur on flat, heavy, wet soils and/or where stubble does not protrude through the ice sheet. Winter cereals may actually be more susceptible to winterkill from long-standing ice than perennial forages such as alfalfa.

Ice sheeting that occurs in early spring is often the most damaging, especially if alfalfa has broken dormancy.

There is little that can be done to eliminate an ice problem. Using a disk or rotary hoe to break the ice will result in more damage to both the implement and crop than if doing nothing. Applying fertilizer to melt large quantities of ice would require many tons per acre, and plants would probably die from salt injury next spring.

The best bet is to wait and assess damage (or lack thereof) in the spring and make the appropriate decisions at that time. There are plenty of other things to worry about aside from the ones we can’t control.