Get the most out of high-priced nitrogen 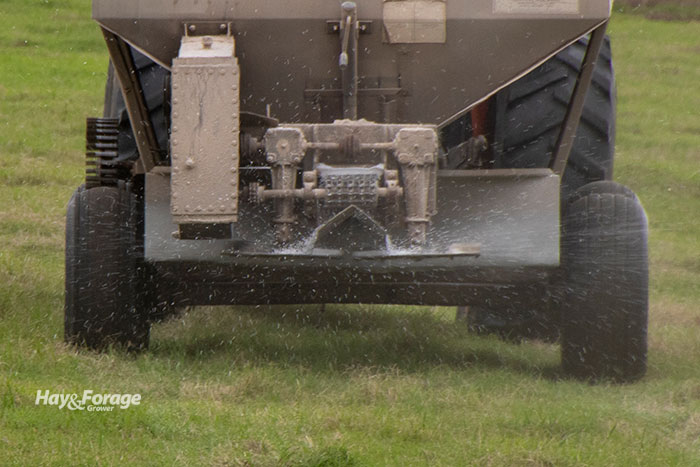 If you’ve checked nitrogen prices lately, the bids are considerably higher than they were a year ago. Even so, there’s still little doubt that you’ll realize an economic return for most timely nitrogen applications made to grass-based pastures and hayfields. However, it’s important not to lose those nitrogen units you’ve paid for.

There are several sources of nitrogen that can be price-checked and compared. Agronomists John Grove and Chris Teutsch with the University of Kentucky recently reviewed the different nitrogen fertilizer options for forage production in the Kentucky Forage News.

The authors note that dry bulk fertilizer blends intended to provide potassium (K), phosphorus (P), and sulfur (S) will likely also contain some nitrogen (N). This is because dry fertilizer materials like monoammonium phosphate (MAP, 11-52-0), diammonium phosphate (DAP, 18-46-0), and ammonium sulfate (AS, 21-0-0-24S) all provide N in addition to other nutrients.

“These fertilizer N salts dissolve readily in moist soil and are excellent N sources, since ammonium-N is plant available, not often subject to N loss,” the agronomists note. “However, due to the high cost per pound of N, these are not normally viewed as N sources.”

Primary N fertilizer sources for forage production are available in both solid and liquid forms. Urea (46-0-0) and urea-ammonium nitrate solutions (UAN, 28-, 30-, or 32-0-0) are most commonly used.

“Urea quickly dissolves in the soil and then hydrolyzes to form ammonium-N,” the agronomists explain. “Urea soil behavior is complicated by the possibility of ammonia gas volatilization losses due to an increasing soil pH, up to 9, near the dissolving urea granule or to the near-granule presence of urease. Urease, an enzyme widely found on both living vegetation and dead crop residues, catalyzes ammonia volatilization during urea hydrolysis.”

Under the right conditions, urease can be responsible for up to 35% of urea-N to be lost. The greatest losses are realized when temperatures are warm, the soil is drying, the wind is blowing, there is vegetative or residue cover, and/or the soil pH greater than 6.5.

Half of the N in UAN solutions is dissolved urea, a quarter is ammonium-N, and a quarter is nitrate-N. Like dry urea, UAN-urea is subject to volatilization loss, but to a lesser extent because only half the UAN-N is from urea.

The authors explain that volatilization loss can be avoided or minimized without using inhibitors if users consider their timing, rate, or N-source. Urea or UAN applied when soils are moist and cool will generally experience little volatilization loss.

As air and soil temperatures warm in the spring and early summer, volatilization losses can be minimized if applications are made just before a rainfall (0.25 inch or more). Losses are also reduced if there is good soil contact with the product at the time of application.

The authors note that in many situations NBPT alone will control volatilization, but some commercial products combine NBPT with other urease inhibitors to extend or improve volatilization inhibition.

California alfalfa may get thirsty in 2021 Next

The alfalfa watch is on Previous