Sulfur may be limiting alfalfa yields 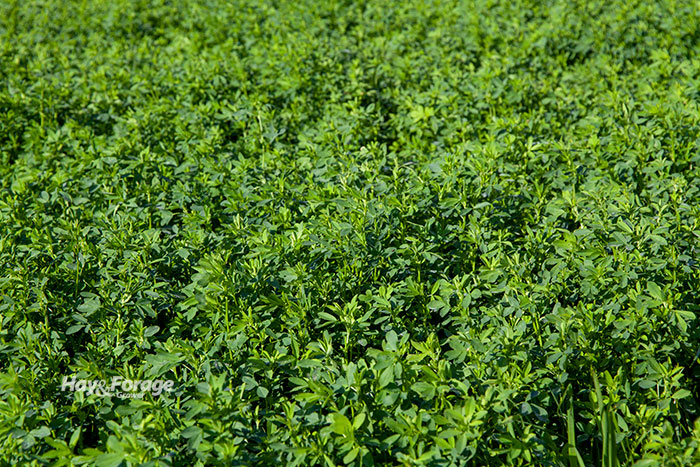 When producers harvest alfalfa, they are removing more from the field than just their crop. The cut forage also contains nutrients that a short time earlier were in the soil. One of those nutrients is sulfur.

Soil organic matter (OM) can supply crops with sulfur, and fields with low concentrations of OM are likely to be deficient in the nutrient. Fields with elevated levels of OM are at risk of needing sulfur, too, especially when high yields of alfalfa are harvested and take the element with it. Research on applying sulfur fertilizer in these situations has been conducted, but the results were deemed inconclusive, according to Dan Kaiser with the University of Minnesota Extension.

The nutrient management specialist says this research has been based on one-year trials, which may not be enough time to determine the benefits of applying sulfur. Therefore, funding was obtained from the state’s Agricultural Fertilizer Research and Education Council (AFREC) for a multi-year study on sulfur fertilization and application rates.

The AFREC study was combined with another that began in 2019 at the Rosemount Research and Outreach Center. “The 2019 trial kicked off our exploration of sulfur for alfalfa,” Kaiser explains. “In that study, we compared several sources of sulfur, both sulfate and elemental sulfur sources, at rates of 0, 7.5, and 15 pounds of sulfur per acre on plots with higher OM concentrations and lower OM concentrations.”

The AFREC study was designed to test fewer sulfur sources than the 2019 trial and focus more on applying fertilizer at different rates: 0, 10, 20, and 30 pounds of sulfur per acre. In both studies, the fertilizers were applied to fields once before seeding and again after first cutting.

“The yield increase due to sulfur fertilizer application was roughly 500 pounds of additional forage per acre over three harvests,” Kaiser notes. “The higher OM fields did average greater forage yield compared to the lower OM soils, which required a higher sulfur application rate – 15 versus 7.5 pounds of sulfur per acre – to maximize yield.”

Results of the AFREC study also show an improvement of alfalfa tonnage by 1,000 pounds of additional forage per acre when a sulfate form of sulfur was applied. Elemental sulfur was tested in this study as well, but these fields yielded less than those receiving sulfate sulfur.

Even though research centered around sulfur application rates is still in its early stages, Kaiser says the data confirms current University of Minnesota alfalfa fertilizer guidelines. He recommends producers apply 10 to 25 pounds of sulfur per acre depending on overall production and soil OM concentration in the top 6 inches of soil.

Although fields with higher alfalfa yields and/or more cuttings may remove larger amounts of sulfur from the soil, Kaiser advises against applying sulfur fertilizers at rates greater than 25 pounds per acre.

Put a stop to pinkeye Next

A second seeding and growing season is near Previous