Wagons and a hay business built to last 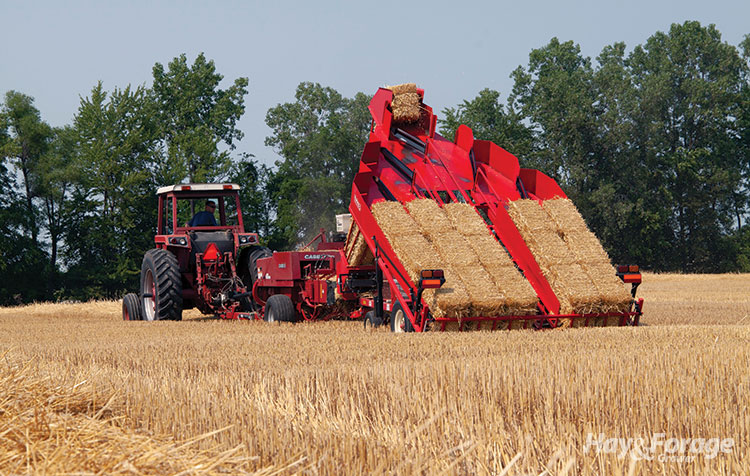 The farm on Township Road 34 was originally bought and given to the great grandparents of Miles and Caleb von Stein as a wedding gift. Fortunately for the two brothers, toasters weren’t in vogue for such occasions back in the day. Miles and Caleb now comprise the fourth generation to farm this northwestern Ohio land that is tucked between the two small farming communities of Rawson and Jenera.

Since the original wedding vows were taken, the farm has undergone several enterprise transformations. Miles and Caleb’s parents, Dennis and Monica, row cropped corn, soybeans, and winter wheat, raised hogs in partnership with a brother, had some sheep and cattle, grew a few acres of hay, and started a retail greenhouse operation in 1999. The least of these enterprises — baling hay and straw — is what intrigued Miles and Caleb the most.

“We couldn’t take income and acres away from our parents, so in 2010 we bought some windrowed wheat straw from neighbors and started baling,” Miles said. “We gradually added more straw acres while also attending college at night for agricultural mechanics.”

These days, the brothers operate the farm with help from their parents, Miles’ wife, Melissa, and Caleb’s wife, Carlie. It consists of about 800 owned and rented acres. 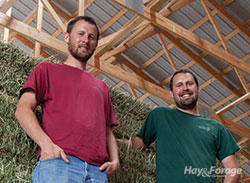 Caleb (left) and Miles (right) von Stein have steadily grown their hay business over the past 10 years. Horse owners and businesses comprise the majority of their clientele.
Miles and Caleb bale 155 acres of hay and 750 acres of straw each year. They also raise corn, soybeans, and winter wheat on the home farm and do some custom baling work. Some of their farm’s row crop acres are being converted to organic production, seeding down hay on those acres during the transition years. Poultry litter is used to maintain fertility.

Although the future goal is to be on the farm full time, both Miles and Caleb still have off-farm income. The slightly older Miles has a seed business and drives a school bus while Caleb works four days on and four days off at a factory in nearby Findlay.

Over the past 10 years, Miles and Caleb have had to look for ways to make, store, and market small square bales efficiently and with mostly family labor. The brothers have strategically added equipment and infrastructure to streamline their system.

Hay is cut with a Massey Ferguson 13-foot pull-type mower conditioner with steel conditioning rolls and an older 12-foot Case IH pull-type with a B&D roller conditioner. “Dry down is crucial for us with only short windows to get hay dry,” Caleb said.

Miles added, “If the ground is wet, we’ll cut it into a narrow windrow, let the ground dry out, and then spread it out with a 10-basket Krone tedder the next day. Everything gets tedded at least once and most of it twice.” The brothers also use two rotary rakes to get the crop back into windrows.

Baling is done with two Case IH small square balers. The bales come off the baler into a Norden (formerly Kuhns) Manufacturing 18-bale accumulator. The accumulated bales are then picked up with a skid steer and grapple and loaded onto specially built, 24-foot flatbed hay wagons that hold either 216 bales of hay or 252 bales of straw. They also have two smaller flatbed wagons. 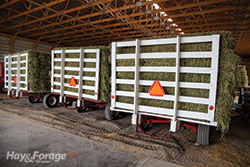 Fine for the equine

Horse owners and businesses comprise most of the von Steins’ clientele. They also sell to a few dairy and beef operations. Straw is marketed to both horse owners for bedding and construction companies in need of mulch.

Most customers are located within two hours of the farm and the brothers will deliver using a gooseneck trailer. For any out-of-state orders, truckers are hired. Recently, the von Steins built a loading dock to easily fill semitrailer vans.

Most of the brothers’ customers are repeat orders from year-to-year. Some of their top-quality hay is also taken to the Mt. Hope hay auction that’s located a little over two hours from the farm. “It’s a good venue to meet and connect with people and gain new customers,” Miles said. “We also get top dollar for our hay there.”

Most of the von Steins’ hay is sold by the bale. “That’s just what a majority of our customers are used to,” Miles said. “They don’t easily comprehend a per ton price. We shoot for 50-pound hay bales and 40-pound straw bales.” The brothers monitor a Facebook marketplace page to gauge hay market price movement up or down.

The von Steins don’t test their hay for quality, as is often the case for haymakers who serve the horse market. “We bale for color and leaf retention because that’s what our customers look at,” Miles explained.

Caleb added, “We feel like we’ve slowly grown at a manageable pace, not promising any more than we know we can deliver. Most of our marketing is by word of mouth, and almost every year we run out of hay and straw.”

The farm’s soils range from sand to clay, but alfalfa is only seeded on well-drained fields.

“We prefer to seed in the spring using oats as a companion crop,” Miles said. “All of our seedings are comprised of an alfalfa-orchardgrass mix that consists of 30 pounds of oats, 20 pounds of coated alfalfa seed, and 8 pounds of a late-maturing orchardgrass variety.”

“We’ve had times where the drilled seed came up the best and other times when the broadcasted seed had better emergence,” Caleb said. “We know our rate is on the high side, but we can’t afford a stand failure or thin stand. We try to keep our stands for about five or six years, including the seeding year,” he added.

The brothers cut and round bale the oats. If possible, they’re put up as dry hay, but they also have a bale wrapper that makes oatlage an option if there’s insufficient drying time available.

Like many commercial haymakers, von Steins also have some beef cattle that can be used as an outlet to feed the oat hay or other low-quality hay that is less marketable. In addition, the von Steins frost seed red clover into winter wheat in the spring. They are sometimes able to cut and make baleage from the clover later in the year. The brothers may wrap anywhere from 200 to 800 bales, depending on the year. 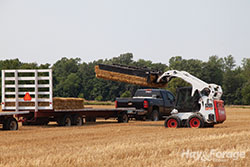 Miles von Stein loads straw bales in the field using a skid steer and grapple. Each wagon holds 252 bales of straw.
When given the choice between row cropping and making hay into small square bales, most of the younger generation would choose the former. Such was not the case for the von Stein brothers. For Miles and Caleb, making hay is a passion. This is likely why the brothers were winners of the 2021 American Forage and Grassland Council’s Forage Spokesperson’s Contest as representatives of Ohio.

“We’re not planning to get bigger in the immediate future,” Miles said. “Haymaking is a good way to start farming, especially with small square bales and the premium price they bring. Also, equipment is relatively cheap, and you can utilize small barns. We’re in a good place right now,” he concluded.

The von Stein brothers will no doubt be making hay for many years to come. Their oak-board flatbed wagons may be around for generations.

Alfalfa kept him on the family farm Next